Yes, I've seen the ornament wreaths around on the world wide web. Here and there and everywhere. They were kind of calling my name. So....

I decided this would be The Year Of The Wreath.

The wire hanger kind of wreaths are fine, but I wanted a really big wreath. I thought a nice styrofoam circle frame would work nicely. But when I went to Michael's, they were out! You've got some nerve, Michael's. SOME NERVE I SAY. And here's something about me. I have no patience when it comes to crafting. I will not be going to another Michael's, or JoAnn's, or anywhere else, and I will not be waiting until they have them another day. I want an Oompa Loompa NOW!

They did have this 18" floral wire wreath frame for less than 3 bucks. Sold! I took it home, gathered my balls - Ha Ha! balls. - and set to glue gunning all over the place.  First like this: 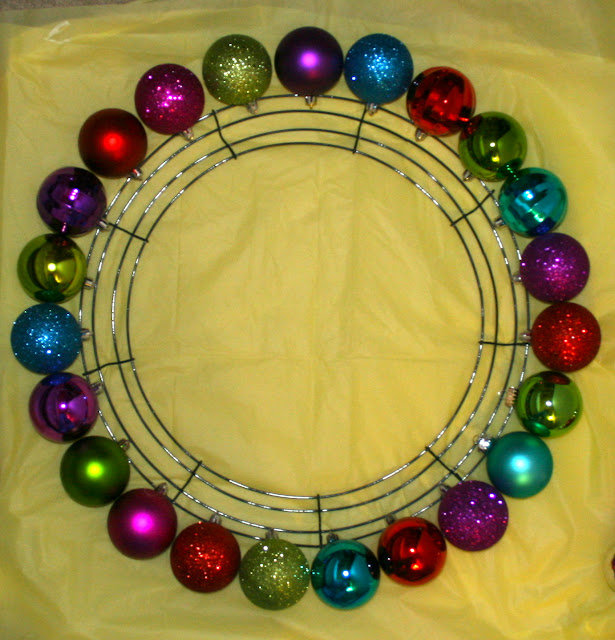 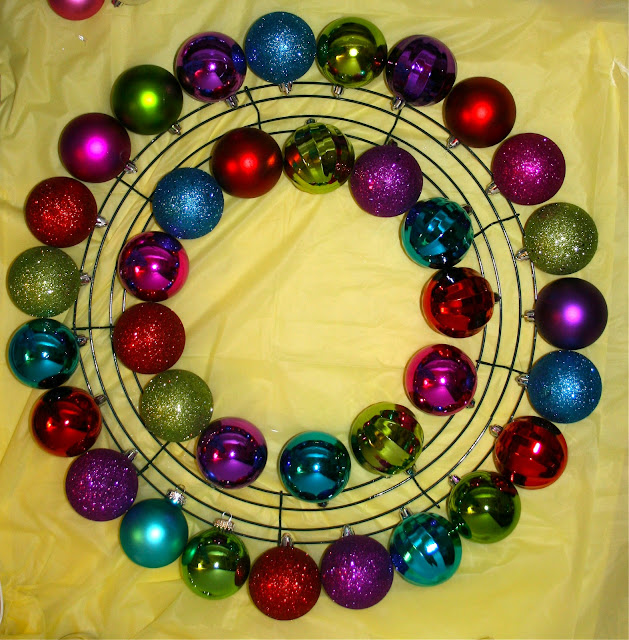 And then I glue gunned on some wide silver garland I had bought to cover up the wire. I really didn't want anyone to be able to peer through the balls and see some unsightly wire. Because I have class, damn it. Balls. 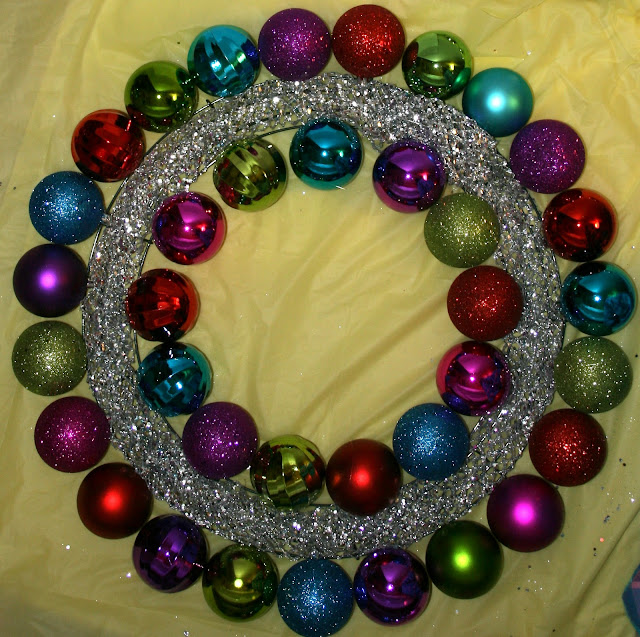 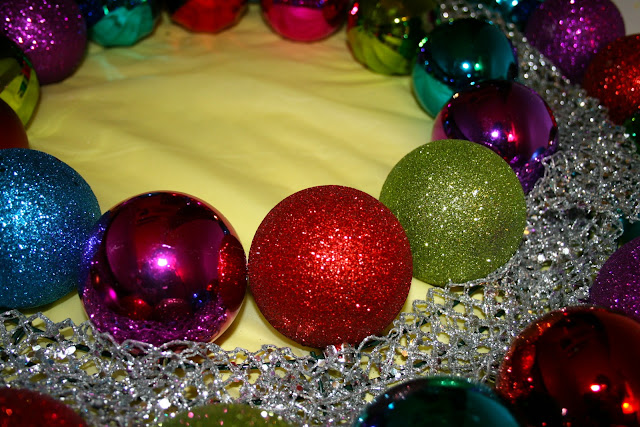 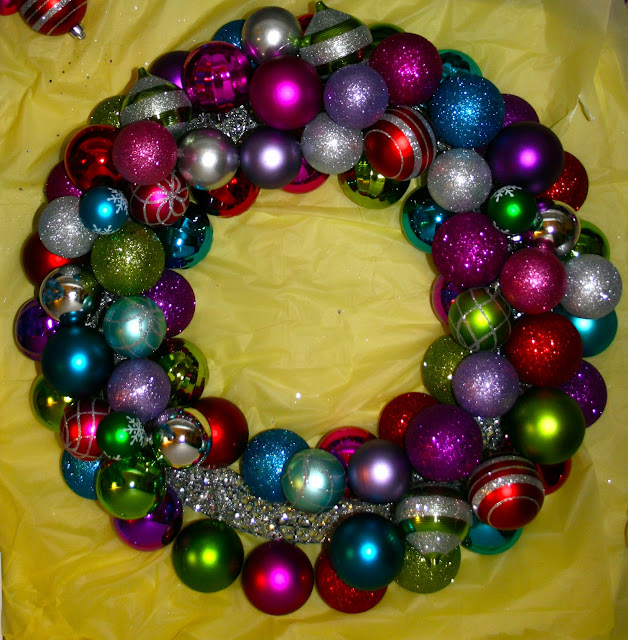 I did it all while I watched TV. It was kind of fun, actually. SO colorful and sparkly! 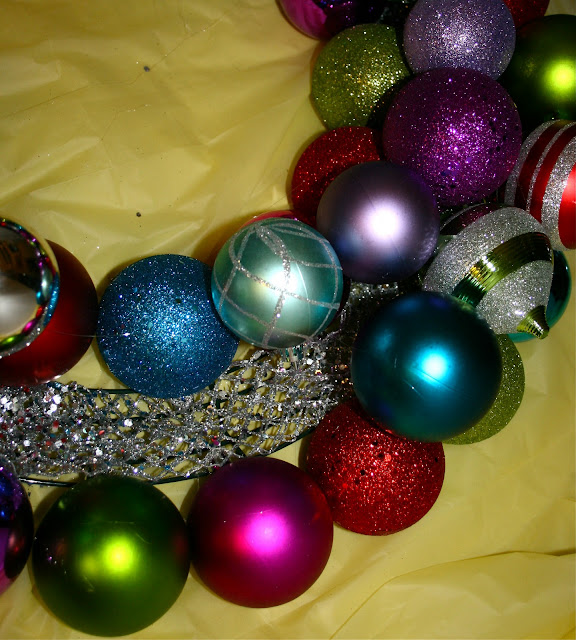 After I had used up all the big balls, I started in with the littles: 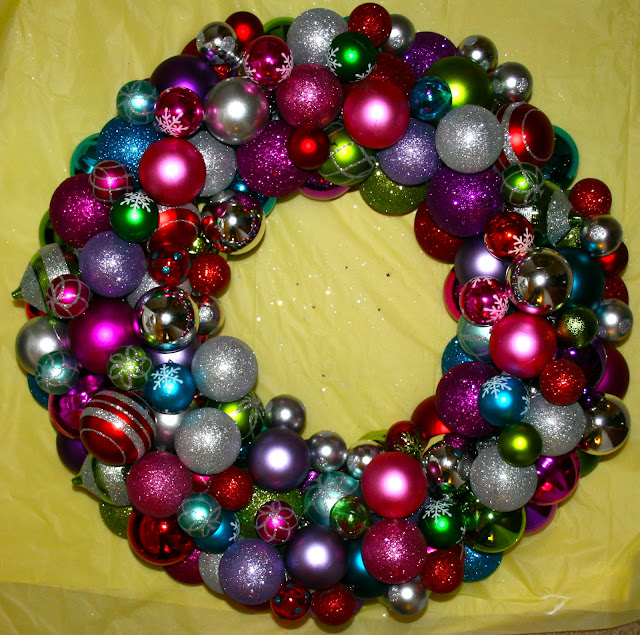 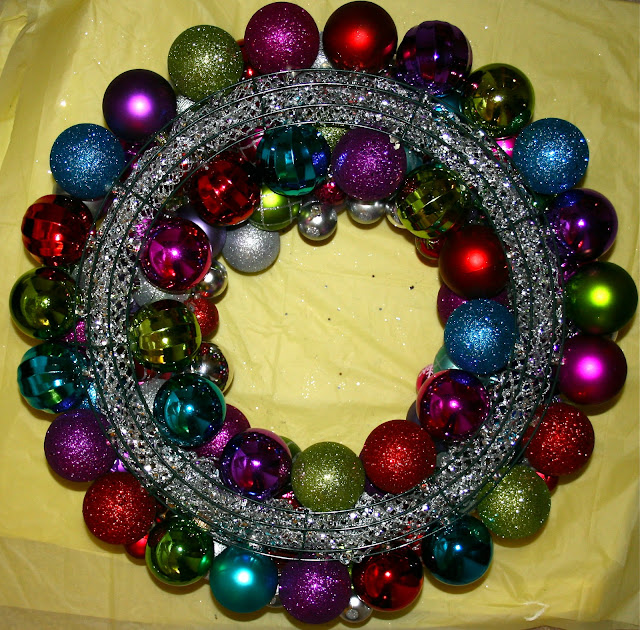 And when it was finished, I hung it up on my boring standard-colored door. And it was beautiful. 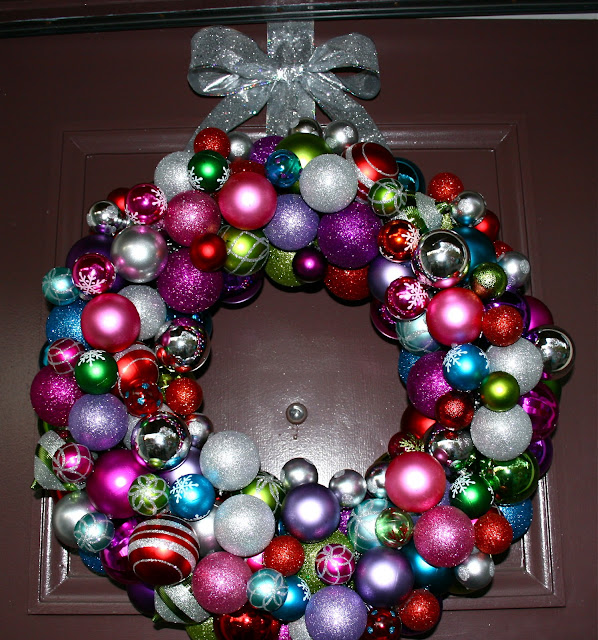 But I was worried the balls might fade in the sunlight - it's happened to me before with another project - so I decided to move it indoors. I didn't spend two-plus hours and a hundred gazillion balls to have to make a new one every year. No siree!

So, I snapped a quick picture of it on my front door, brought it inside and hung it above my mantel, called my crafting confidant Ali, and declared WITH CONVICTION I was done with all my crafting for the season. DONE! And I was glad to say it. Glad to be able to focus on Christmas and other kinds of fun stuff.

AND THE CRAFTING GODS HEARD ME. AND THEY WERE VENGEFUL.

And I didn't even need to get out of bed to know that my last crafting project of the season was not done with me yet. Huge chunks of balls had fallen off that stupid wreath.

I don't know all the logistics of the situation, but here's what I do know - I had to dismember the entire thing, peel off glue from each and every ball, and start all over. I had used the shatter-proof balls, thank goodness, but now bunches of the balls had bald spots on them from where the cheap paint and glitter had come off with the glue. It was like a giant puzzle reassembling that thing to make sure not too many of the bald spots showed. The first go around was crafting fun, this go around was a huge crafting nuisance.

But this time I wasn't messing around. I used an entire tube of E6000 on that sucker. Take that, Wreath! I may have just killed a million brain cells by way of E6000, the most toxic glue in all the land, but I HAVE CONQUERED YOU! 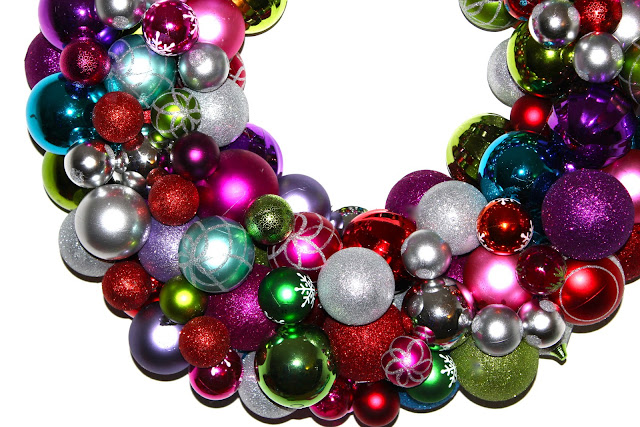 Look at you, Wreath, sitting there all beautiful and colorful and sparkly and acting like you weren't a complete pain in the butt. 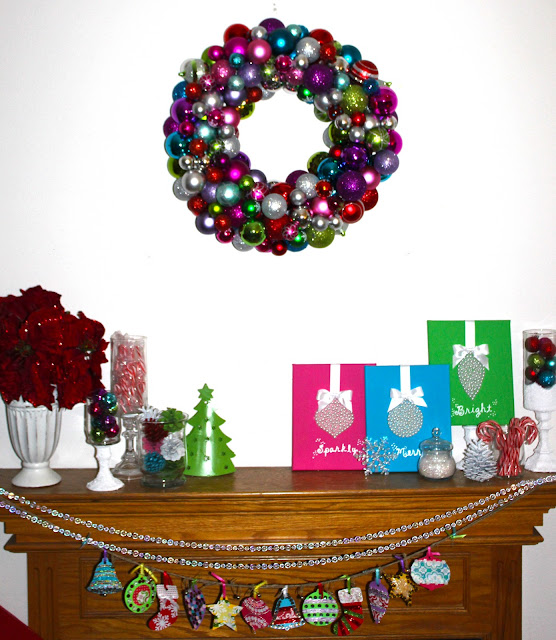 You're lucky you were worth it. 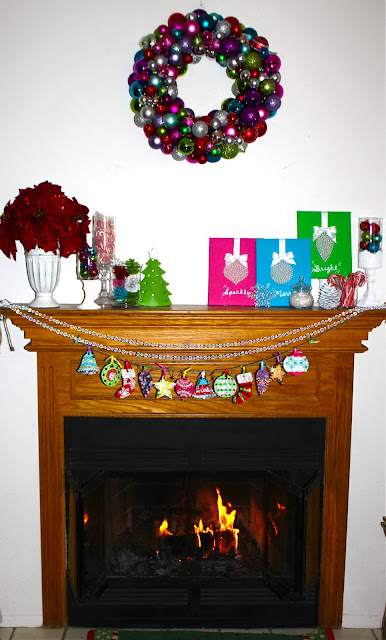 So worth it, in fact, that you earned yourself a sparkly, silvery ribbon. 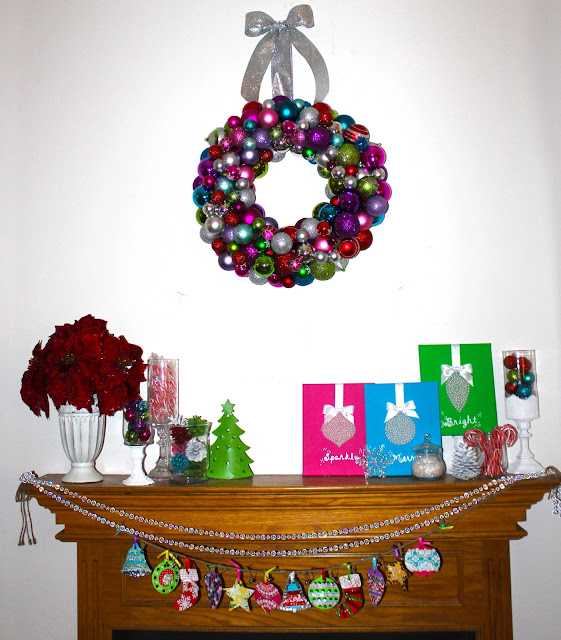 Oh, Fancy Wreath, I can't be mad at you, you are too beautiful!

That's right. I said it.

Hear that, Crafting Gods? DO YA? 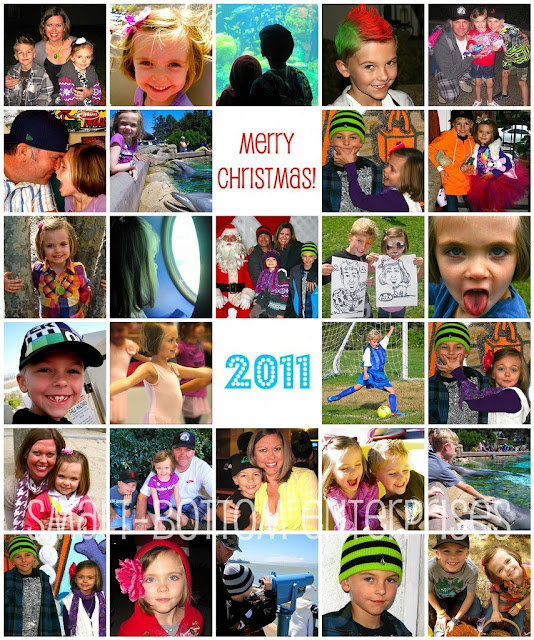 Email ThisBlogThis!Share to TwitterShare to FacebookShare to Pinterest
Labels: Holidays, House, Make It

It's good to know there is someone out there who talks to their craft projects like I do---although they never listen and I must sometimes admit defeat!

I love it!!! I seriously should have gotten some ornaments when they were on clearance right after christmas. Oh well, lol.

Looks fantastic! This post is seriously hilarious!!!! So glad I found you, love the humor mixed with cute crafts!

Too Funny! I seriously LMAO reading the instructions. This was great and I am looking forward to making my own for the 2018 Christmas season. Thanks for the laugh!

You are so funny! Really enjoyed your way of talking! Gave me great idea, thanks, from Independence Missouri 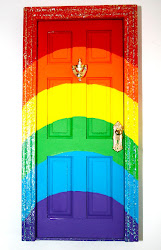 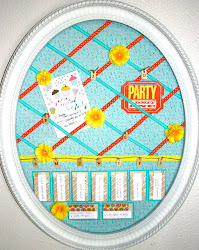 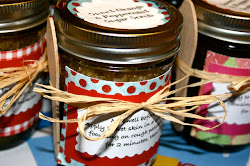 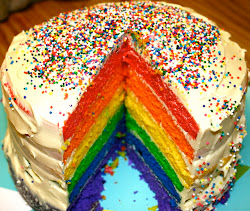 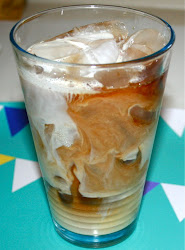 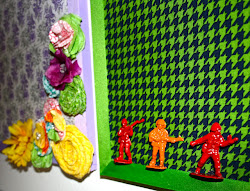 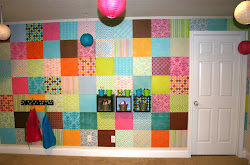